FEELING down? Smile. Cheer up. Put on a happy face. No doubt you’ve dismissed these bromides from friends and loved ones because everyone knows that you can’t feel better just by aping a happy look.

Or perhaps you can. New research suggests that it is possible to treat depression by paralyzing key facial muscles with Botox, which prevents patients from frowning and having unhappy-looking faces.

In a study forthcoming in the Journal of Psychiatric Research, Eric Finzi, a cosmetic dermatologist, and Norman Rosenthal, a professor of psychiatry at Georgetown Medical School, randomly assigned a group of 74 patients with major depression to receive either Botox or saline injections in the forehead muscles whose contraction makes it possible to frown. Six weeks after the injection, 52 percent of the subjects who got Botox showed relief from depression, compared with only 15 percent of those who received the saline placebo.

(You might think that patients would easily be able to tell whether they got the placebo or Botox. Actually, it wasn’t so obvious: Only about half of the subjects getting Botox guessed correctly. More important, knowing which treatment was received had no significant effect on treatment response.) 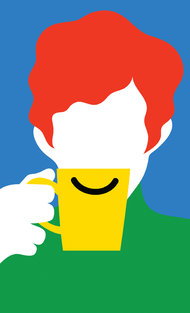 Other studies over the past several years have found similar effects of Botox on mood. Michael Lewis at Cardiff University reported that nondepressed patients at a cosmetic dermatology clinic receiving Botox injection above the eyes frowned less and felt better than those who did not receive this injection. And M. Axel Wollmer at the University of Basel found that Botox injection was superior to a placebo in a group of depressed patients.

Is paralyzing the muscles involved in frowning truly enough to make depressed patients feel better? The notion that your expression can exert a powerful influence on your mood turns our sense of psychological causality on its head. After all, we smile because we feel happy, and cry because we feel sad, not the other way around, right?

Not necessarily. The idea that facial expressions may feed information back to our brain and influence our feelings goes back to a theory of emotion first proposed by Charles Darwin. In “The Expression of the Emotions in Man and Animals,” Darwin posited that the control of facial expression causes a like effect on subjective emotions. William James took the idea further and proposed that emotions were the result, not the cause, of various bodily sensations, suggesting that “we feel sorry because we cry, angry because we strike, afraid because we tremble, and not that we cry, strike, or tremble, because we are sorry, angry, or fearful, as the case may be.”

We are used to thinking of the brain, not the body, as the prime mover of our emotional states. Consider the field of so-called psychosomatic medicine, which emphasizes a mischievous flow of information from brain to body: hence, the psychosomatic stomachache, headache and the like. You can literally worry yourself sick.

The Botox studies, by contrast, suggest a circuit between the brain and the muscles of facial expression in which the brain monitors the emotional valence of the face and responds by generating the appropriate feeling. (Obviously, information flows in both directions, as you can think yourself into practically any emotional state and then have the face to match it.)

There are other treatments for depression that appear to use facial feedback in a similar way. Light therapy stimulates the retina and excites the optic nerve, which sends signals directly to the brain and effectively treats seasonal depression. And direct electrical stimulation of the brain’s vagal nerve has antidepressant effects.

Botox for depression is part of a long tradition of “outside-in” somatic therapies — many of dubious efficacy — that manipulate the body with the aim of altering the brain and mind, for instance by using cold wet sheet packs to treat severe agitation or acupuncture for anxiety.

In a broad sense, these Botox studies underscore one of the biggest challenges in treating people with depression. They might think that the reason they are depressed is that they have little interest in the world or their friends — a mistaken notion that is the result, not the cause, of their depression. They insist that only once they feel better will it make sense for them to rejoin the world, socialize and start smiling. Their therapists would be well advised to challenge their inverted sense of causality and insist that they will start feeling better after they re-engage with the world.

Whether Botox will prove to be an effective and useful antidepressant is as yet unclear. If it does prove effective, however, it will raise the intriguing epidemiological question of whether in administering Botox to vast numbers of people for cosmetic reasons, we might have serendipitously treated or prevented depression in a large number of them.

Richard A. Friedman is a professor of clinical psychiatry at Weill Cornell Medical College.

This article was posted in Blog, Injectables. Bookmark the permalink. Follow comments with the RSS feed for this post. Both comments and trackbacks are closed.